CHARLOTTE, N.C. — As people in Colorado line up to buy recreational marijuana for the first time in the nation, families in the Carolinas are pushing lawmakers to bring a form of medical marijuana here.

The 4-year-old boy has a brain malformation and severe epilepsy. Now, his mother’s hoping for another treatment option, still not legal in the Carolinas: medical marijuana. 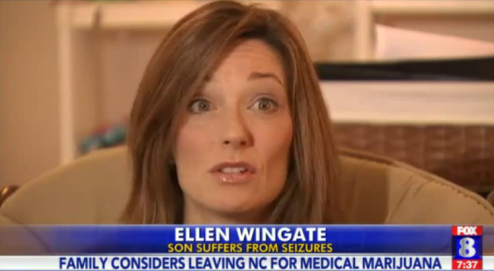 “I have heard that it is beyond life-changing. Seizures stop, some kids are able to come off all their other meds, which is huge,” Wingate said.

On Wednesday, Colorado became the first state in the nation to legally regulate and sell marijuana.

For children with medical issues, the drug is liquid and taken orally, not smoked. It’s a form low in THC, the component of marijuana that’s psychoactive, and high in CBD, which has medical qualities.

“It’s not what you think. It’s not high school kids going to get high,” Wingate said.

In a statement to Eyewitness News, Jones said, “Over the past months, I have been approached by several North Carolinian parents of children with terminal brain cancer, extreme epileptic seizures, and other life-threatening illnesses who have exhausted all available medical options to provide relief for their suffering kids.

These individuals have made a compelling argument that a non-intoxicating compound called cannabidiol, or CBD, could – if consumed in a safe, controlled liquid form – offer a viable medical alternative that would allow these children to enjoy a long, healthy life. Considering the extreme circumstances these families are facing, I believe this issue should certainly be studied at the state level. I encourage our state elected officials to give this issue the attention it deserves by consulting with medical professionals to determine the efficacy of the safe use of CBD in liquid form for young patients that have no other medical options.”