While families across the United States are broken as a mother and child move to Colorado, from their home states where medical marijuana is not legal, for non-psychoactive high CBD oil anecdotally proven to stop seizures, an Arizona family is being harassed by local state officials and Maricopa County Attorney William Montgomery…

The Welton family received a medical marijuana card from the state for their son Zander in September and began treatment with cannabidiol (high CBD oil) with great results.

However, the local officials have threatened criminal prosecution against the parents.

Ironically, it’s not for the use of marijuana, nor for it being a child patient, but simply because they argue against the preparation—a non-psychoactive extract!

In this absurd case taken up by the ACLU the local authorities are attempting to prevent the recommended treatment, as well as preventing the parents from seeking legal protection in the form of an injunction as they state that it’s not necessary until they actually would have been prosecuted! In other words, County attorney Montgomery’s reasoning is ‘wait until we arrest you, then seek legal help.’

As explained fully in the Weltons’ Application for Preliminary Injunction, Zander experienced unprecedented improvement in his physical and emotional development during the short time that he took CBD oil along with dried marijuana plant. For Zander and his parents, the possibility that progress during his developmental years may be lost or stunted constitutes irreparable harm. Having demonstrated a strong likelihood of success on the merits and the possibility of irreparable harm, the Weltons have met their burden to obtain a preliminary injunction. Yet Montogmery continues to fight against an injunction while the parents wait and abstain from treating their son with CBD oil in fear of the threatened criminal prosecution.

The ACLU stepped up to defend the family and their rights against Montgomery, and while the battle rages on, the absurdity is that they are allowed to use psychoactive THC marijuana, and dried marijuana flowers, but not the non-psychoactive CBD extract or oil preparation, stating “that has been shown by Plaintiffs is that they prefer to give Zander CBD in oil form rather than in a mixture of marijuana flowers” and that “there is no proof and not even an allegation that the alternative delivery method that the parents have moved to is any less effective that [sic] the CBD oil.” (emphasis in the original) 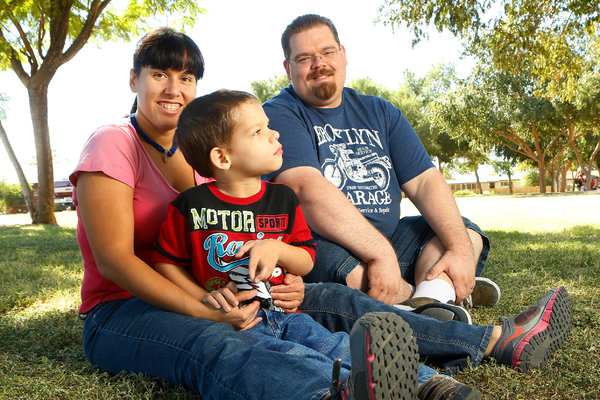 Zander with his mom and dad in Arizona

Jennifer Welton explained that she had turned to medical marijuana only as a last resort. And because it actually seems to be working.

“We tried so many other regular pharmaceutical medications,” she said. “They don’t have the same stigma, but they didn’t help him and sometimes they made him worse. I wouldn’t want any of my other kids using marijuana. But this is Zander’s medication, and for the first time, I feel like there’s hope for him.”

Montgomery protests that “Plaintiffs explain that concentrating the cannabinoids
allows them to be more easily swallowed and allows for more accurate dosing.
Whether that is true is irrelevant: it doesn’t mean that such concentration is allowed by
the statute”, referring to the AMMA.

Apparently he would prefer that this child smoke high-THC marijuana rather than take an oral non-psychoactive extract preparation—the specific treatment for his seizure condition.

Montgomery argues that plant extracts as a class are not under the decriminalized umbrella of the AMMA and thus remain unlawful under Arizona’s criminal code, (arguing that AMMA “does not allow persons to purchase or possess extracts” including CBD oil, the non-psychoactive seizure treatment used by Zander), and has gone so far as to direct the state’s largest law enforcement agency to arrest persons using extracts while his office is presently prosecuting at least one such case involving the mere possession of an edible candy.

This case began October 2013, and Zander continues to wait for his CBD oil treatment until the case is resolved, it now being February 2014.