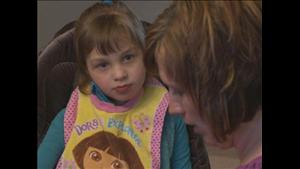 Gretta and her mom, a nurse, Maria. Photo by Kare.

Every seizure seven year old Gretta has, up to fifteen a day, causes trauma to the brain and slowly stunts her development. She walks unsteadily and cannot feed herself. She was diagnosed with Lennox-Gastaut syndrome is a severe form of epilepsy that usually appears before 4 years of age and includes several different types of seizures. To date, fifteen prescriptions, special diets, even brain surgery haven’t helped.

“If you would have asked me a year ago if I would have had my daughter on marijuana I would have thought you were crazy. I mean, really?” said Maria Botker. “But when you have put your daughter through something as scary as brain surgery like we did with Greta about three years ago, this seems like nothing, really nothing.”

Gretta’s mother Maria Botker is a longtime nurse who measures the dose carefully. The medical marijuana is an oil extract and comes in liquid form, which Greta swallows in a gel capsule three times a day. She said after two months, seizures are now reduced to four to five a day.

“She went 22 hours without a seizure, that’s unheard of for her. Unheard of. This makes sense, it’s a simple choice,” said Botker.

However, this Minnesota family of five is now split with Mom and Gretta living in Colorado where CBD oil from the strain “Charlotte’s Web” is legal.

Another Minnesota family from Brainerd moved to Colorado this month to gain the same access for their daughter, and two more families are already planning the move, joining the hundred plus families who have already moved from their home states as ‘marijuana refugees’.

“A year ago none of us thought this would be a potential miracle. And now everyone thinks it is. I think we finally found it. Think we did,” said Maria Botker. “It’s saving my daughter. Am I going to wait around and watch my daughter have 12-15 seizures a day because something is not FDA approved or something doesn’t have that kind of clearance or research backing it? Absolutely not,” said Botker.

Other families following in similar paths as the Botkers report the same progress. Anna and Biagio Burriesci, of New York City, moved to Colorado recently for their two year old daughter Grace, who has Dravet syndrome. They report her 300 seizures a day are down by 60 percent.

Recent polling shows that more than three-quarters (76%) of Minnesota voters support changing state law to allow people with serious and terminal illnesses to use medical marijuana.